Tom Simpson was born on 30th November 1937 in Haswell in the north-east of England. He was the youngest of six children. His father, also called Tom, was a coal miner but there was no work for him in the north-east so he and his wife with their 3 youngest children: Harry, Renee (my mother) and Tom moved to Harworth, on the border of Nottinghamshire and South Yorkshire where there was a big coal mine. Tom’s father got a job there.

There were no cyclists in the Simpson’s family, although Tom´s father was a very good sprint runner when he was young. Cycling was a very social thing in the UK in 1950, when they moved to Harworth, so all three young Simpsons joined The Harworth Cycling Club. Tom started racing in 1952, won his first race in 1954 and in 1956, when he was still 18 years old, he was picked for The Olympic Games. He got a bronze medal in the team pursuit

Tom was an excellent track rider, but wanted to be a professional road racer. He couldn’t do that in the UK so in 1959 he moved to Brittany, where he raced as an amateur, becoming a professional in August 1959. His first road race as a professional was the 1959 World Championships where he placed 4th.

Tom and Eddy Merckx were very close. I have interviewed Eddy several time, and we always speak of Tom. Eddy told me he first met Tom when he was 16. Merckx became a professional in 1965 with Rik Van Looy‘s team Solo-Superia, but Van Looy didn’t encourage him at all. Merckx moved to Peugeot, where Tom was team leader, in 1966, and he says that Tom’s attitude to him compared with Van Looy’s was: “Like the night and day”. Tom encouraged Eddy, helping him develop, and although they had a dispute early in the 1967 Paris-Nice race, which Tom won, they remained good team mates and friends. Eddy told me he was very upset when Tom died, and he travelled to England for Tom’s funeral.

Helen, Tom’s widow, remarried two and a half years after Tom’s death to Barry Hoban (winner of Gent-Wevelgem, 8 stages in The Tour de France and 2 stages in La Vuelta a España). Helen´s sister Kay married an Australian cyclist called Graeme Gilmore, who won many six-day races. Their son Matthew Gilmore also won many six-day races, he was World Madison champion and a Olympic silver medallist.

The full story of Tom’s life told by those who knew him best is in my book. Here is the link to buy it: https://www.cyclinglegends.co.uk/index.php/buy/books/cycling-legends-01-tom-simpson-detail 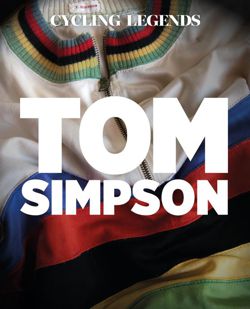